I get to the event a half our late and I am greeted my boss, who says to go see a chef in the pastry tent. I went and saw him and he liked the fact that i worked so hard washing dishes yesterday that he says he needs me in his kitchen! He gave me his card and i am to email him all my information!! Ahhhhh!!!! So excited!!
After i calmed down from my excitement, i went and met up with the chef I was assigned to. I put together sausage plates (that were either blood sausage or snail/chicken) while helping the chef’s helper(named Jacob) put together a lamb kieba(?) so that was fun.
I walked around after I was done and went home, so a fun time was had at all!! 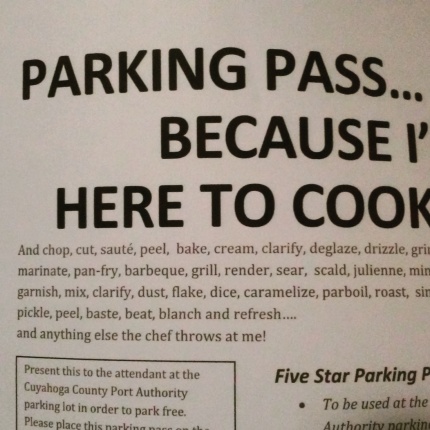 The guy I worked with 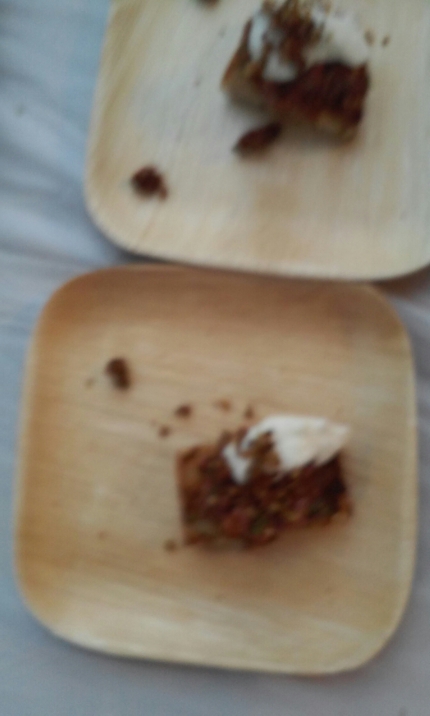 The lamb dish. I know this stuff isnt vegan, but it was a culinary adventure I wanted to share with everyone.

Yesterday, i washed dishes for four hours, cut tortillas into smaller circles and cut up some cabbage. Pretty slow day though.

This morning, i lightly fried some tortillas, shaved romaine lettuce and met Michael Symon. Pics to be posted tomorrow

Live from the Employee Break room at Firstenergy Stadium, its day 2 of Five Star!! Im just enjoying a nice cup of coffee and waiting to see who I get paired up with to help prep today!!

I skinned and julliened carrots, i skinned and cut squash into chunks, i chopped up some cabbage, i nearly cut off one of my fingernails, and cut up pea pods today. Six hours in all. So much fun!!

I just arrived in Cleveland for the Five Star Sensation fundraiser for UH Cancer Center!! This is my second official year of doing this, and I am excited! Michael Simon is replacing Wolfgang Puck as the main guy, which is nice. I am currently sitting around waiting for my assignment, so I will update you all on this later!!

It is humid af here in Ohio and everyone is still trying to get over the Cavs fall on the road to glory.

Meanwhile in my kitchen…its been interesting. Raw veganism is a fun science experiment. Zucchini pasta is on order tonight with some pesto. Noms!!!!!!

There is a woman named Laura and she has a youtube channel on Tastemade called ‘Raw. Vegan. Not gross.’ She does a lot of raw vegan stuff but she does do some cooked vegan stuff as well. I am going to make her beet lasagna tonight for dinner, providing no one in my house eats my beets (they hate broccoli though, but they fight over beets. I dont get it). Her voice is amazing too. Its pleasing to listen to. GO WATCH!!

I figured I am not officially a part time raw vegan if I dont try to make spring rolls. I tried. I got the papers, some carrots, cucumber and avocado. I sliced it all up and made a hot mess rolling it (i need practice). As far as taste goes, I give it an A. For presentation, a C.    Not too bad. Whatever, i can eat it with a fork. If anyone has any tips, please feel free to message me.

Cuddling up with a bowl of oats and some apples watching the Triple Crown and American Pharoah.

Anyway, been eating cucumbers by the bushel lately. So refreshing.

I have been wanting to make spring roll wraps but my avocados dont want to ripen. With my luck, they will be so ripe they are starting to rot tomorrow when i get off work.

I am thinking about doing a mini series about some vegan restaurants in Cleveland. Done a little research and i have an idea of where i would like to go.